The Prototype Xbox (also known as the Big X) was the first variation of the Xbox to be revealed to the public.

The console was used as a showcase unit that would be shown to the press and Microsoft's partners[1].

During GDC 2000, Bill Gates and Seamus Blackley revealed the Xbox's hardware to the public. During the conference the duo unveiled the Xbox Prototype. The design of the console was by no means the final product and was only used as a way to help give developers an idea of what they'd be working with, despite it not offering the power the retail unit would[2].

The units were brought along to various press conferences as showcase units. According to Seamus Blackley the units were transported from location to location in penguin cases[3].

The prototype was used at press meets throughout 2000, until more details including the final design of the Xbox would be revealed at CES 2001 by Bill Gates and The Rock.

Up until July 2018, the whereabouts of the Xbox Prototypes were unknown until Graeme Boyd, Xbox’s social media marketing manager, revealed to the public on Twitter that one of the prototype models would now be on display to the public at Microsoft's Visitor Center in Redmond, Washington.

Shortly after Graeme Boyd uploaded the image to his Twitter page, Seamus Blackley began giving more details about the prototype consoles including what they were used for and how they were transported.

On November 10, 2020, during the Xbox Series X and Xbox Series S's launch livestream one of the Xbox prototypes could be seen sitting on a shelf in the background as various developers and Xbox employees talked about the new consoles launch.

The Xbox Prototype was a huge silver X shape milled from a solid block of aluminum with a light in the center. The light would glow green when it was turned on and stay dark when the console is not in use.

The consoles disc drive, ventilation and other ports were placed on the back side of the console.

Because of the consoles' large size and being made out of a solid block of aluminum, the prototypes reportedly cost $18,000 each to manufacture.

When the prototype was first show to the public in 2000, a Microsoft SideWinder Game Pad Pro could be seen with this console. This hinted at this controller being the main input device for the Xbox.

However this was not true and was most likely used for development purposes, as the controller would go on to be used for PCs instead.

The prototype with the Microsoft SideWinder Game Pad Pro. 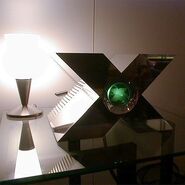 The prototype at its unveiling. 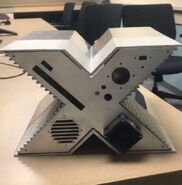 The prototype in testing