Xbox One X
The Xbox One S is a video game console developed and marketed by Microsoft that was released globally on August 2, 2016. The console was the first revision of the Xbox One, with the biggest differences being a slimmer design, support for 4K Ultra HD video streaming and HDR Gaming support. The console was released at a much more affordable price when compared to the standard Xbox One. The console was made available in 500GB, 1TB, 2TB variants.

In 2019 an all digital model of the Xbox One S was released, the Xbox One S All-Digital Edition is almost identical to the console it is based off with the only difference being the missing disc drive.

In late 2020, the Xbox One S was discontinued, along with all other Xbox One models, in preparation for the release of the Xbox Series X and Xbox Series S.[1]

The console includes all of the same ports on the backside of the console, minus the Kinect port. To use a Kinect on the Xbox One S, a separate adapter had to be purchased.

On June 13, 2016, during its E3 2016 press conference, Microsoft unveiled the Xbox One S, a revision of the Xbox One hardware with a streamlined form factor. Its new casing is 40% smaller than the original design, and supports vertical orientation with a stand. The capacitive power and eject keys were replaced by physical buttons,[2] the side USB port and controller sync button were moved to the front of the console, and its power supply is integrated into the console's casing rather than sitting externally. Xbox One S requires a USB adapter to attach a Kinect sensor, as it no longer includes the proprietary port used on the original model.[3] A free USB adapter was provided by Microsoft to Kinect owners who registered their ownership of Kinect and Xbox One S online, but this promotion ended in March 2017. Although Microsoft stated that it would eventually bundle the adapter with standalone Kinect units, this has yet to occur.[4][5]

Xbox One S natively supports video output at 4K resolution, and high dynamic range (HDR) color using HDR10. 4K video can be played from supported streaming services and Ultra HD Blu-ray Disc,[6][7][8] Games are upscaled from 1080p to 4K.[9] Rod Fergusson, head of Microsoft's Gears of War studio The Coalition, stated that Xbox One S also had upgraded CPU and GPU components, which were capable of providing more consistent performance in Gears of War 4 during graphics-intensive sequences than the previous hardware.[10] While Xbox planning lead Albert Penello initially stated that the additional CPU and GPU access granted to developers for Xbox One S is to enable HDR and would have "literally no impact" on the performance of games,[11] games with dynamic resolution or uncapped frame rates can see increased performance due to higher GPU clock speed and ESRAM bandwidth.[12] Xbox One S also ships with a revision of the Xbox One controller, with textured grips and Bluetooth support.[13][14]

Main article: List of Xbox One bundles#Xbox One S

Over forty different Xbox One bundles were released, including seven special edition consoles. The first special edition Xbox One S consoles were released no long after the release of the standard Xbox One S, with the first coming in the form of the 2TB Gears of War 4 Crimson Omen console. This variant was the second and surprisingly last Xbox console to feature a built in 2TB hard drive.

The most recent Xbox One S bundle was the 1TB Roblox bundle which was released on March 17, 2020. Despite the most recent bundle now being over one year old, Xbox One S consoles are still be manufactured a long side the Xbox Series X and S.

Nick Pino of TechRadar was mostly positive, considering the Xbox One S to be "the pinnacle of what Microsoft set out to create three years ago", but noting regressions such as the lack of Kinect port (which was interpreted as being "one last kick in the pants for all the gamers forced into buying the more expensive console bundle two short years ago"), and the lack of 4K content sources beyond Blu-ray, Netflix, and YouTube. Visual improvements were noted on games such as Fallout 4 and Rise of the Tomb Raider when upscaled to 4K. Concerns were shown that the revised hardware and HDR support would lead to fragmentation of Xbox One's ecosystem, as not all users will necessarily experience a game the same way.[15]

Dieter Bohn of The Verge praised the Xbox One S's revised design as being "svelte and good-looking", noting its smaller form factor and the lack of power brick. The Xbox One S was also praised for being the cheapest 4K-compatible Blu-ray Disc player on the market, but it was argued that consumers were "(not) as eager to upgrade to 4K Blu-rays as they were to DVDs back in the day. Especially when 4K streaming boxes can be purchased for much less." The lack of HDR-compatible games available on-launch was panned, as well as Microsoft's choice of the standard over Dolby Vision (which was the only HDR standard supported by the reviewer's 4K television). Bohn concluded that the Xbox One S would appeal best to new owners or those who wish to leverage its HDR and 4K support, but recommended that existing owners hold off until the release of the Xbox One X.[16][17]

On May 7, 2019 Microsoft released an all digital edition variant of the Xbox One S. The console is near identical to the regular Xbox One S but does not include a disc drive.

A picture of the Size Comparison between the Original Xbox One and the Xbox One S.

The Xbox One S controller pictured in front of the Console on it's vertical stand. 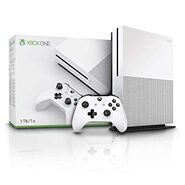 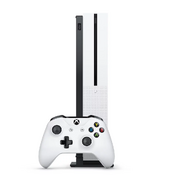