Another version with a similar jewel on the top said: " Thanks for Partnering with Xbox" 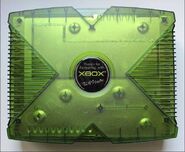 The Console with a Duke Green Score on the top
Community content is available under CC-BY-SA unless otherwise noted.
Advertisement