Xbox Wiki
Register
Don't have an account?
Sign In
Advertisement
in: Clean Up, Xbox 360, Game controllers,
and 3 more

The Xbox 360 has the ability to support four wireless controllers. Additionally it can support three wired controllers through the use of its USB ports (two in front, one in back). The wired controller cords are nine feet in length and are breakaway similar to those used with the Xbox .

The controller for the Xbox 360 is a similar yet improved version of the Type-S gamepad for the Xbox. The Xbox 360 controller adds the new feature of the Xbox guide button, which has the appearance of the Xbox 360 emblem and is surrounded by a ring of light. Pressing the Xbox guide button will bring the Xbox 360 out of sleep mode or instantly bring up the "Xbox Guide". The ring of light lights up to designate what controller "port" the gamepad is currently using and which console (if more than one) the controller is connected to. The black and white buttons have been redesigned as shoulder buttons, now referred to as bumper buttons, located above the left and right triggers. The rear of the controller has been redesigned to include a new port where the player can connect a headset. The new port replaces the two non-standard USB connectors on the front of the Xbox controller.

The Xbox 360 controller has the same basic familiar button layout as the Controller S except that a few of the auxiliary buttons have been moved. The "back" and "start" buttons have been moved to a more central position on the face of the controller, and the "white" and "black" buttons have been removed and replaced with two new bumpers that are positioned over the analog triggers on the back of the controller. The controller has a 2.5 mm TRS connector on the front, allowing users to connect a headset for voice communication.[3] It also features a proprietary serial connector [4] (which is split into 2 parts on either side of the headset connector) for use with additional accessories, such as the chatpad.

On August 31, 2010, Microsoft's Larry Hyrb (a.k.a. Major Nelson) revealed a new design of the Xbox 360 controller which is set to replace the Wireless controller bundled with the Play & Charge Kit. Among small changes such as the shape of the analog stick tops and grey-colored face buttons, the new controller features an adjustable directional pad which can be changed between a disc type D-pad or a plus shaped D-pad. The control pad was released in North America exclusively with Play & Charge Kits on November 9, 2010 and was released in Europe during February 2011.[5]

A standard Xbox 360 controller features eleven* digital buttons, two analog triggers, two analog sticks and a digital D-pad. The right face of the controller features four digital actions buttons; a green "A" button, red "B" button, blue "X" button and amber "Y" button. The lower right houses the right analog stick, in lower left is a digital D-pad and on the left face is the left analog stick. Both analog sticks can also be "clicked in" to activate a digital button beneath. In the center of the controller face are digital "Start", "Back" and "Guide" buttons. The "Guide" button is labelled with the Xbox logo, and is used to turn on the console/controller and to access the guide menu. It is also surrounded by the "ring of light", which indicates the controller number, as well as flashing when connecting and to provide notifications. The left and right "shoulders" each feature a digital shoulder button, or "bumper", and an analog trigger.

Wireless controllers also feature an additional "connect" button located between the "bumpers" to facilitate syncing with the console. 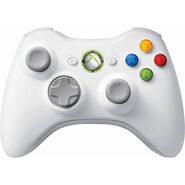 Some of the rock candy Xbox 360 controllers. 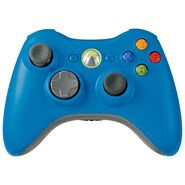 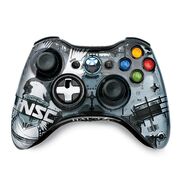