The Xbox 360 E is a video game console developed and marketed by Microsoft. It was the third and final Xbox 360 revision and is the successor to the Xbox 360 S.

At the Xbox's press conference at E3 2013, Microsoft announced two new consoles. One being the much-anticipated Xbox One, and the other being the Xbox 360 E.

During the announcement, Microsoft revealed that the new model of the Xbox 360 would be smaller, sleeker, and quieter than the older S model.

Microsoft also announced that the Xbox 360 E would be available for purchase on the day it was announced in the United States, UK, Canada and Australia, with the console being released very soon in other territories.

When the console was announced, Microsoft stated that it would run quieter and cooler compared to the original Xbox 360 and the slimmer redesign, the Xbox 360 S.

The console is slightly smaller than its predecessor the Xbox 360 S. The Xbox 360 E has also been completely redesigned on the outside to match its successor, the Xbox One.

Another major difference is the absence of multi-AV out port. Instead, what's left is a jack for a 1/8-inch breakout AV cable. A cable for a composite connection (yellow video plus red/white stereo audio) comes in the box, but you'll need to find a component one for HD.

Microsoft has also removed some of the versatile connection interfaces that were present on the Xbox 360 S. This includes the dedicated optical audio-out found on earlier Xbox 360 models. This means the only way to get surround sound on the Xbox 360 E is through a HDMI connection.

Another loss for the Xbox 360 E is one of its USB ports. This means that in total the 360 E only has 4 USB ports compared to 5 on older models.

The touch power and eject buttons from the 360 S have also been replaced with more-traditional physical buttons.

Approximately one year after the release of the standard Xbox 360 E, a Special Edition Blue Bundle was released. This was the only alternate variant of the Xbox 360 E that was released and the very last Xbox 360 model to be produced.

Approximately 10000 and 50000 models of this variant were made. The bundle included a Special Edition Blue console, which included a 500GB hard drive which was the most storage available in any Xbox 360 model. A standard 500GB Xbox 360 E was eventually released not long after the Blue console. A matching controller, copies of Call of Duty: Ghosts, Call of Duty: Black Ops II and one month of Xbox Live Gold were also included in the bundle. 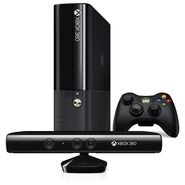 Everything included with a standard Xbox 360 E bundle.
Community content is available under CC-BY-SA unless otherwise noted.
Advertisement