The Xbox 360 is a seventh generation video game console developed by Microsoft. Released on November 22, 2005, it is the successor to the original Xbox and is the second console in the Xbox family.

The Xbox 360 competed with Sony's PlayStation 3 and Nintendo's Wii as part of the seventh generation of video game consoles. It was officially unveiled on MTV on May 12, 2005, with detailed launch and game information announced later that month at the 2005 Electronic Entertainment Expo.

On April 20, 2016, Microsoft announced that it would end the production of Xbox 360 hardware, although the company would still continue to support the platform.

The Xbox 360 also included a number of new features and add-ons such as- the ability to stream music, television and films though Xbox Music, Xbox Video and third-party content services.

New wireless controllers with a number of designs, expanded hard drives and the Kinect sensor.

The release of these additional services and peripherals helped the Xbox brand grow from gaming-only to encompassing all multimedia, turning it into a hub for living-room computing entertainment.

The Xbox 360 also brings back Xbox Live with a number of improvements and new features.

Known during development as Xenon, Xbox 2, Xbox FS,[1] Xbox Next, or NextBox, the Xbox 360 was conceived in early 2003.[2] In February 2003, planning for the Xenon software platform began, and was headed by Microsoft's Vice President J Allard.[2] That month, Microsoft held an event for 400 developers in Bellevue, Washington, to recruit support for the system.[2] Also that month, Peter Moore, former president of Sega of America, joined Microsoft. On August 12, 2003, ATI signed on to produce the graphic processing unit for the new console, a deal which was publicly announced two days later.[3] The following month, IBM agreed to develop the triple-core CPU for the console.[2] Before the launch of the Xbox 360, several alpha development kits were spotted using Apple's Power Mac G5 hardware. The earliest known sighting of the Xbox 360 "Alpha" XeDK Power Mac units was October 2003. This was due to the system's PowerPC 970/970fx CPU and ATI Radeon 9800 series GPU being similar to IBM's Xenon Processor and ATI's Xenos GPU, both of which were specifically designed for the Xbox 360. The Alpha XeDK units were eventually replaced by the "Beta" XeDK units, which were very similar to the Xenon model Xbox 360 released in 2005.

A major focus during the Xbox 360's development was security. The original Xbox suffered many security flaws in both hardware and software, leading to the quick exploitation of the machine to run unsigned programs such as Linux, play backups of Xbox game discs, and to develop homebrew games. Because of this, the Xbox 360 was designed to be extremely secure from a software and hardware point of view. As stated by Chris Satchell in September 2005, "There are going to be levels of security in this box that the hacker community has never seen before." [1] Many security improvements were made, many of which directly came about from the failures made on the original Xbox. The implementation of a Hypervisor, which is a small virtual machine that lives in the RAM, and prevents unsigned code execution as well as tampering with the console's memory. Another vital security feature implemented was IBM's "eFUSE" technology, which are small fuses soldered on to the CPU die that were blown with every system update, preventing downgrading to a possible exploitable dashboard/kernel, as well as storing vital console information like the per-console CPU key. However, time would prove that the Xbox 360 was not nearly as secure as once thought, as by the beginning of 2006, exploits had been discovered that allowed pirated game backups to run from the DVD drive, as well as an exploit to bypass the all-seeing Hypervisor.

The Xbox 360 launched world wide in November 2005, it was in short supply at one point in many regions, including North America and Europe.

As of June 2014, 84 million Xbox 360 units had been sold world wide. In 2009 the Xbox 360 became the sixth best selling video game console in history, despite being outsold by the Nintendo Wii and PlayStation 3.

When the Xbox 360 was first released in 2005, the console was made available in two different bundles. Similar to how the Xbox One was available with and without a Kinect. While the bundles were never officially given a name they were commonly known as the Xbox 360 Pro or Premium and the Xbox 360 Core. These bundles often included a variation of the Media Remote.

The Pro/Premium was the higher end bundle, costing around $100 US more than the Core bundle and included a 60GB external hard drive.

Several years after the launch of the Pro, a 60 GB version of the console was released on August 1, 2008. A year later the model was discontinued completely.

The Core model, being the cheaper out of the two launch variants was originally released in all regions other than Japan. However the variant was eventually released in Japan in 2006, a year after the consoles original release. The Core model also shipped with a wired variant of the Xbox 360 controller rather than the wireless which was shipped with all other models.

In 2007, around two years after the launch of the original Xbox 360 units, a new configuration, the Xbox 360 Elite was released. The Xbox 360 Elite was the more upper classed model and included a 120 GB external hard drive, already connected to the console. Unlike past Xbox 360 consoles, the Elite used a matte black design rather than the usual white/silver.

The price of the Xbox 360 Elite was significantly marked down in 2009 to get rid of stock to make room for newer models.

Main article: Xbox 360 S
Also known as the Xbox 360 S was a complete hardware revision of the Xbox 360 that was released in 2010. This newer model completley replaced other models available prior to its release, those being the Elite and Arcade.The S was much smaller and compared to past models and a lot quieter.

The Xbox 360 S also included a port dedicated for use with the Kinect which was released several months after the launch of the Slim model.

Main article: Xbox 360 E
The final model in the Xbox 360 family was the Xbox 360 E. It was announced and released in 2013, the same year that the Xbox One was released. The E model is once again slimmer than past models and takes most of its designs from the first Xbox One model.

The Xbox 360's original graphical user interface is the Xbox 360 Dashboard; a tabbed interface that features five "Blades" (formerly four blades), and was designed by AKQA. It can be launched automatically when the console boots up without a disc, or when the disc tray is ejected. However, the user may choose to launch a game automatically if a disc is inserted. A simplified version of it can also be accessed at any time via the Xbox Guide button on the gamepad. This simplified version shows the user's gamercard, Xbox Live messages and friends list. It also allows for personal and music settings, in addition to voice or video chats, or returning to the primary Dashboard from the game.

As of November 19, 2008, the Xbox 360's dashboard has changed from the "Blade" interface, to a dashboard reminiscent of that present on the Zune and Windows Media Center.

Since the console's release, Microsoft has released several updates for the Dashboard software. These updates have included adding new features to the console, enhancing Xbox Live functionality and multimedia playback adding compatibility for new accessories, and fixing bugs in the software. The latest Dashboard update, revision 2.0.7357.0, was made available on November 19, 2008.

At E3 2008, at Microsoft's Show, Microsoft's Aaron Greenberg and Marc Whitten announced the new look Xbox 360 called "The New Xbox Experience". The idea of the update is to allow people who cannot navigate the current Blade GUI, to navigate throughout the console easily. The GUI uses the Twist UI (used in Windows Media Center, Zune). The Blade interface is still used in the new Xbox Guide. The new guide allows the user to do everything he/she could do from the Dashboard itself, whether it's ejecting a disk or browsing the Marketplace, thus making it easier to navigate throughout the system.

As well as a GUI update, many new features have been put into the system's software. Firstly, the update offers the ability to install games from the disk to the hard drive, reducing load times and disk drive noise. However, the game's disk must remain in the system to run its installed version (Similar to The PS2 HD LOADER Feature)A new Community system is also built in, allowing the creation of digitalised Avatars. These Avatars can then be used for multiple activities such as sharing photos or playing Arcade games like 1 vs. 100. The update was released on November 19, 2008.[4]

While previous system updates have been stored on internal memory, this will be the first update to require a storage device. The update requires at least 128MB free space on either a memory card or a hard drive.[5] Microsoft has stated that many Core or Arcade users will not have sufficient space on their limited memory cards for the new update thus providing them with a free 512MB memory card or a discounted 20GB hard drive.[6][7]

Xbox 360 Prototype consoles with the middle and one to the left of the middle being final designs.

A number of Xbox 360's for sale not long after the consoles initial release. 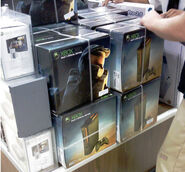 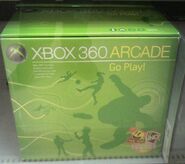