This article is about the Xbox console. For the brand, see Xbox (brand). For other uses, see Xbox (disambiguation).

It was Microsoft's first foray in the gaming console market, competing against the Sega Dreamcast, Sony PlayStation 2 and the Nintendo GameCube. It was also the first console produced by an American company since the Atari Jaguar which was discontinued in 1996.

After the Sega Dreamcast ended production in 2001, many of the Dreamcast's games were ported to the Xbox.

In 1998 four engineers from Microsoft’s DirectX team, Kevin Bachus, Seamus Blackley, Ted Hase and DirectX team leader Otto Berkes, disassembled some Dell laptop computers to construct a prototype Microsoft Windows based video game console. The team hoped to create a console to compete with the then Sony's upcoming PlayStation 2, which was luring game developers away from the Windows platform. The team approached Ed Fries, the leader of Microsoft’s game publishing business at the time, and pitched their “DirectX Box” console based on the DirectX graphics technology developed by Berkes’ team. Fries decided to support the team’s idea of creating a Windows DirectX based console.[5][6]

During development, the original DirectX box name was shortened to Xbox. Microsoft’s marketing department did not like the Xbox name, and suggested many alternatives. During focus testing, the Xbox name was left on the list of possible names to demonstrate how unpopular the Xbox name would be with consumers. However, consumer testing revealed that Xbox was preferred by far over the other suggested names and “Xbox” became the official name of the product.[7]

The Xbox was Microsoft's first video game console after collaborating with Sega to port Windows CE to the Sega Dreamcast. Microsoft repeatedly delayed the console, which was first mentioned publicly in late 1999 during interviews with then-Microsoft CEO Bill Gates. Gates stated that a gaming/multimedia device was essential for multimedia convergence in the new times.[8]

When Bill Gates unveiled the Xbox at the Game Developers Conference in 2000, audiences were impressed by the console's technology. At the time of Gates' announcement, Sega's Dreamcast sales were diminishing and Sony's PlayStation 2 was just going on sale in Japan. [9]

Concentrating on making a big splash in Japan, Microsoft delayed its European launch, though Europe later proved to be the more receptive market.[9]

Some of Microsoft's plans proved effective. In preparation for its launch, Microsoft acquired Bungie and used Halo: Combat Evolved as a launch title. At the time, GoldenEye 007 for Nintendo 64 had been one of the few hit FPS games to appear on a console, some of other ones being Perfect Dark and Medal of Honor. Halo: Combat Evolved proved a good application to drive the Xbox's sales.[9] In 2002, Microsoft made the second place slot in consoles sold in North America.

Xbox LIVE, a fee-based online gaming service was introduced to the Xbox in November 2002. It enabled its subscribers to download new content and connect with other players through a broadband connection.

On April 17, 2010 Microsoft ended Xbox LIVE support for the original Xbox making it impossible to play Xbox LIVE games on the console.

However, a company known as XLink Kai created a way to continue to play Xbox games online even after Xbox LIVE support ended in 2010.

The appearance of the Xbox is a lot like what the name suggests. The console itself is a black 320 × 100 × 260 mm (12.5 × 4 × 10.5 in) box with a X shape going across it with a green circle in the middle with the logo inside of it. On the front of the console there are 4 controller ports in total, 2 being on each side of the power button. In the middle of the controller ports is the On/Off and eject disc button.

During development Xbox Co-Creator Seamus Blackley drew some prototype controllers that looked similar to the Dreamcast controller. They were then shared to Xbox fans and the rest of the world. Blackley also stated that Microsoft never decided which controller would be the final decision for the Xbox. The development team eventually decided to go with a large chunky design, now better known as The Duke.

Main article: Halo 2
Halo 2 was launched in 2004, because of its campaign and online feature's the Xbox was winning the online gaming wars. Halo 2 became so popular it became the best selling Xbox game of all time.

During the still on going console wars (PlayStation vs Nintendo vs Xbox), Halo 2 on its own was beating the PlayStation 2's online library all the way up until 2010. Once the Xbox 360 was launched, Halo 2 was soon made available on the Xbox 360 via Backwards Compatibility.

On April 17, 2010 Halo 2 and all of its servers shut down for good as well as the Xbox 360 severs. The PC version was also shut down in early 2014 due to a lack of players. But by using XLink Kai it is still possible to play Halo 2 Online on the original Xbox.

The Dakota Pad was the prototype controller, It had the green Xbox logo from top of the Xbox console in the middle of it. But was eventually replaced by The Duke controller. However when the Xbox launched the Xbox with The Duke a lot of people struggled with The Duke. The Duke was eventually replaced by Controller S. The Controller S prototype was the same but, just like the Dakota Pad it had the green Xbox logo in the middle of it.

When Gamestop would sell you these Xbox's Gamestop had they're own controllers for the original Xbox!. There was the Controller S version (which had a small Gamestop logo instead of the original Xbox logo in the middle. It also had 2 small black buttons in between the thumpers and next to the D-Pad. A Back button and Start button. The D-Pad for this controller was really bad looking. Not many of these sold when they 1st came out.

Main article: List of Limited Edition Xbox consoles
Over the Xbox's life there were many limited edition variations made of the consoles both by Microsoft and other companies. These limited edition models all varied in the way they look compared to the regular Xbox. Mountain Dew and Microsoft teamed up to make the Limited Edition Mountain Dew Xbox. A crystal colored Xbox was also released to mark the consoles 2 year anniversary. 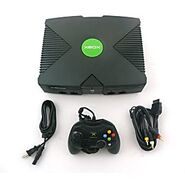 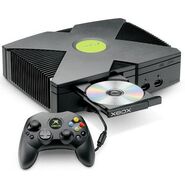 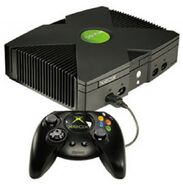 A Original Xbox with a Duke controller

A Upclose shot of the Duke Controller plugged into the console. 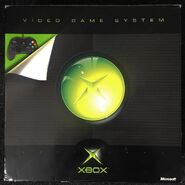 Packaging for the console that showed a Controller S was included.
Add a photo to this gallery

Retrieved from "https://xbox.fandom.com/wiki/Xbox_(console)?oldid=24274"
Community content is available under CC-BY-SA unless otherwise noted.