$499 - $1,000 on collectors websites
The Hello Kitty Collector's Pack was a pack that came with its own designed Xbox, White Controller S and Hello Kitty Mission Rescue. The only way to buy this console at the time was to buy a $5000 TV from one specific retailer. There are currently 550 of these. The Console was first thought to be a april fools joke by Xbox fans. This console was to be approached by the female demographic.

The Design comes with a Pink box and all the Mission Rescue Characters, The Console has the Green Xbox Logo on the box. The jewel on the console however is Silver grey, same with the controller. The Console was rumored to have its own Hello Kitty Controller but was cancelled due to unknown reasons. 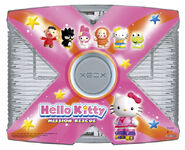